My little one (7 years old) recently asked what she’s supposed to do if I die. Her sister (9 years old) didn’t seem quite as concerned (not even a little), but I decided to share my answer with both of them anyway.

I told them there will be a shiva after the funeral with lots of cake, and there better be some tears. I explained that I have one friend who will come by when it’s time to divide up my purses, and Daddy’s not allowed to get married for AT LEAST 2 years.

They will also have the blog. They will have “Dim Sum and Doughnuts.”

There is a search engine built right into “Dim Sum and Doughnuts,” so all they have to do is punch in words until they find the answers they’re looking for. The problem, is time. My dad used to say “We live on a string,” and he was right. Life is unpredictable.

But that’s a lot of pressure; I have a lot to say, about a lot things. So, in that spirit, I bring you this because I think it’s an important topic and one that will inevitably come up for my girls:

When You Have A Broken Heart

When your heart feels like it’s breaking, it sucks and it hurts. But, for most people who enter into some kind of relationship, it’s inevitable. Below are some examples of how a heart can feel broken, and they can be mixed. If you have something to add in the comments, please do. #ItTakesAVillage

When It’s Unrequited Love: This is the Starter Pack for love. Carrying a torch for someone who doesn’t feel the same is not unusual. At least for me, it wasn’t. In elementary school, I was The Sh*t. I ran the 50 yard dash LIKE A BOSS and boys picked up on that heat. But in middle school and high school, none of the boys I loved, loved me back. Well, some did, but a lot didn’t.

I didn’t know it at the time, and I probably would’t have listened anyway, but boys not loving me back only helped me in the end. It taught me how to be friends with them instead, and that has served me very well.  Plus, it’s good that most of the boys didn’t love me back. I wasn’t ready for that kind of attention yet. I would have been even more out of control than I already was.

When You Get Cheated On: Stings. Stings bad. Blow to the EGO. Actually, I take that back. That’s not always true. The first time I got cheated on, it didn’t hurt as much as it did piss me off. I was in college, and one of my friends saw him–dumb ass that he was, kissing some girl in her sorority. He was hot, I didn’t blame the girl, but NO. There were lots of other guys around. I needed no part of being cheated on. #BoyBye. (Except we’re still friends, but he’s a dummy for doing that.)

When You Get Blindsided: The break up you don’t even see coming. Those are the real mind fu*ks because you will spend an INORDINATE amount of time replaying everything in your head—what you said, what he said, what you should have said, what you wished you said. It’s time consuming and draining. You will lose sleep and you will obsess. The thing is—that process is important. It sucks SO bad, but it won’t go without its lessons about him, and you.

When You Screwed Around With Him Because You Like Him, But He Isn’t Calling: Also known as The Hump & Dump. That’s some rough action, but you asked for it. Sorry. What in the world made you think it was OK to screw around with a guy you’re not “for real” dating? You don’t give that sh*t away for free! NO, YOU DO NOT. Boys need to earn that. I’m not going to say a romance NEVER blooms from a slide into 3rd, but on balance, if you screw around with a guy too early, it’s over—and he’s off to tell his friends before you even zip up your pants. #LATER

When It Means Something To You, But It’s A Bootie Call To Him: Get right with that ASAP, or get out. But you won’t. You won’t get out, because these boys are fun, and they’re addictive. Eyes wide open! Know your time together is finite and when it’s over, accept that it’s over and be happy you had that kind of fun. He’s a rambling man. He can’t be held down by anyone, not even you. Consider yourself lucky; he picked you for a bit, and a little bit goes a long way with these guys. The end crashes like the Demon Drop, but the memories will last a lifetime. Have fun and don’t expect anything. And don’t get pregnant.

When You Turn Into A Psycho: These guys. TOXIC. I want to be able to tell you to walk away (RUN!) from these guys, but I can’t. These guys are the worst, but also the BEST. They are constant adrenaline. Your love will be strong, but these are NOT the guys you marry. YOU BETTER HEAR THAT NOW, because you won’t when you’re in it. These relationships are on FIRE. Any breakup will be futile because one of the two of you won’t “accept” it. It’s a cycle-of-psycho. But it’s an addiction, and addiction can lead us to do crazy things. I pulled some bat sh*t cuckoo stuff when I was younger with guys who pushed me to my limits—things I’m not proud of— (although two of the things are kind of impressive). But I was young and dumb. Whatareyagonna do? 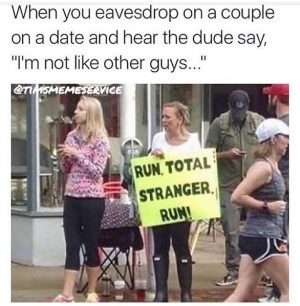 When You Love Him, But He’s Not Right For You: These breakups are a killer because they aren’t due to lack of love or any other matter of the heart. They’re about other things: cultural or religious differences, disparate values, unrealized expectations. Maybe you’re not getting out what you’re putting in, or maybe you’ve just outgrown the person…? Whatever it is, someone is making the brave decision to cut their losses before resentment settles in. It’s hard because it’s not personal. It’s just not working anymore and you know (cognitively) that it won’t in the future. It’s a breakup driven by the head, not the heart. It’s the “right” thing to do, but still, there’s a huge void when it’s over, and everything hurts. A lot.

All breakups hurt. That’s why we feel like we are suffering from “heartbreak.” But really, it’s not heartbreak, it’s heartache. The way you are feeling right now, you won’t feel like this forever. There will be someone who gets you the same way, or in better ways. You will be happy again. You will recover.

But in the meantime, mourn it. Whether you had no other choice but to end it, or you got dumped during dinner—attention needs to be paid. Take some time for yourself, or call your friends: Order a pizza, break open a carton of ice cream, or a bottle of wine (or both), and mourn that sh*t. 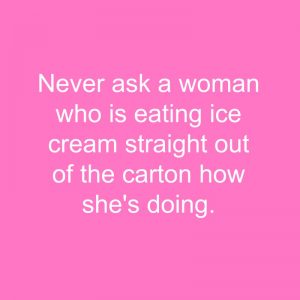 Just not for too long. If you mourn an aching heart for too long, it will get unhealthy and unproductive, and—quite honestly—kind of weird. Once you come to terms with the fact that a purpose has been served, and you’re lucky for the growth and memories, it will be time to move on. You will get moving again. It may take 3 weeks or 3 days or 3 hours, but sooner or later the pit in your stomach will start to subside, and the hole in your heart will get filled with new people and new memories.

These coveted people we choose to be with for however long, they all play an important part in our story. If it doesn’t work out, it will only help in leading you to the one you’re supposed to be with—so respect the time you had, learn more about what you need, and acknowledge the moment you’re in.

And then get back to good, so you’re ready to go when the next one shows up.